The anaerobic/anoxic/oxic (A2O) process is globally one of the widely used biological sewage treatment processes. This is the first report of a metagenomic analysis using Illumina sequencing of full-scale A2O sludge from a municipal sewage treatment plant. With more than 530,000 clean reads from different taxa and metabolic categories, the metagenome results allow us to gain insight into the functioning of the biological community of the A2O sludge. There are 51 phyla and nearly 900 genera identified from the A2O activated sludge ecosystem. Proteobacteria, Bacteroidetes, Nitrospirae and Chloroflexi are predominant phyla in the activated sludge, suggesting that these organisms play key roles in the biodegradation processes in the A2O sewage treatment system. Nitrospira, Thauera, Dechloromonas and Ignavibacterium, which have abilities to metabolize nitrogen and aromatic compounds, are most prevalent genera. The percent of nitrogen and phosphorus metabolism in the A2O sludge is 2.72% and 1.48%, respectively. In the current A2O sludge, the proportion of Candidatus Accumulibacter is 1.37%, which is several times more than that reported in a recent study of A2O sludge. Among the four processes of nitrogen metabolism, denitrification related genes had the highest number of sequences (76.74%), followed by ammonification (15.77%), nitrogen fixation (3.88%) and nitrification (3.61%). In phylum Planctomycetes, four genera (Planctomyces, Pirellula, Gemmata and Singulisphaera) are included in the top 30 abundant genera, suggesting the key role of ANAMMOX in nitrogen metabolism in the A2O sludge. 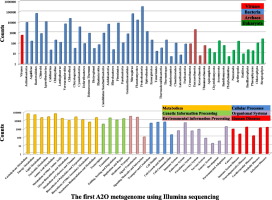