The concentrations of phthalate esters (PAEs) in Chinese hospitals were investigated by simultaneously determining concentrations of gas- and particle-phase PAEs. PAEs were detected in two third-class first-grade hospitals, two second-class first-grade hospitals, and a community health service center. Hospital drugstores had the highest concentration (24.19 μg/m3), which was 1.54 times that of newly decorated houses. The second highest concentration was found in the transfusion rooms, averaging 21.89 μg/m3; this was followed by the concentrations of PAEs in the nurse's workstations, the wards, and the doctor's offices, with mean concentrations of 20.66, 20.0, and 16.92 μg/m3, respectively. The lowest concentrations were found in the hallways (16.30 μg/m3). Of the six different kinds of PAEs found, major pollutants included diethyl phthalates, dibutyl phthalates, butylbenzyl phthalates and di(2-ethylhexyl) phthalates, comprising more than 80% of all PAEs present. Meanwhile, a comparison between different wards showed that PAE concentrations in the maternity wards were 1.63 times higher than in the main wards. Based on known health hazards, our results suggest that the PAEs seriously influence the health of the pregnant women and babies; therefore, it is of great importance to take the phthalate concentrations in hospitals into consideration. In addition, hospital indoor air was more seriously contaminated than the air of newly decorated houses. 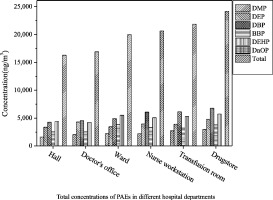