A three-dimensional electrochemical oxidation (3D-EC) reactor with introduction of activated carbon (AC) as particle micro-electrodes was applied for the advanced treatment of secondary wastewater effluent of a wet-spun acrylic fiber manufacturing plant. Under the optimized conditions (current density of 500 A/m2, circulation rate of 5 mL/min, AC dosage of 50 g, and chloride concentration of 1.0 g/L), the average removal efficiencies of chemical oxygen demand (CODcr), NH3–N, total organic carbon (TOC), and ultraviolet absorption at 254 nm (UV254) of the 3D-EC reactor were 64.5%, 60.8%, 46.4%, and 64.8%, respectively; while the corresponding effluent concentrations of CODcr, NH3–N, TOC, and UV254 were 76.6, 20.1, and 42.5 mg/L, and 0.08 Abs/cm, respectively. The effluent concentration of CODcr was less than 100 mg/L, which showed that the treated wastewater satisfied the demand of the integrated wastewater discharge standard (GB 8978-1996). The 3D-EC process remarkably improved the treatment efficiencies with synergistic effects for CODcr, NH3–N, TOC, and UV254 during the stable stage of 44.5%, 38.8%, 27.2%, and 10.9%, respectively, as compared with the sum of the efficiencies of a two-dimensional electrochemical oxidation (2D-EC) reactor and an AC adsorption process, which was ascribed to the numerous micro-electrodes of AC in the 3D-EC reactor. Gas chromatography mass spectrometry (GC–MS) analysis revealed that electrochemical treatment did not generate more toxic organics, and it was proved that the increase in acute biotoxicity was caused primarily by the production of free chlorine. 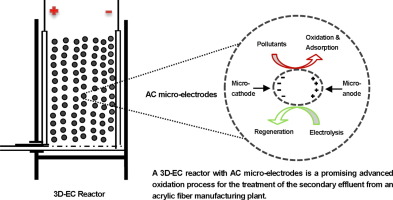