This study examined concentrations of 15 perfluoroalkyl acids (PFAAs) in tissues from male Mozambique tilapia (Oreochromis mossambicus) collected at Loskop Dam, Mpumalanga, South Africa in 2014 and 2016. Nine of the 15 PFAAs were detected frequently and were included in statistical analysis and included two of the most commonly known PFAAs, perfluorooctanesulfonic acid (PFOS) (median, 41.6 ng/g) and perfluorooctanoic acid (PFOA) (median, 0.0825 ng/g). Of the tissues measured, plasma (2016 and 2014 median, 22.2 ng/g) contained the highest PFAA burden followed by (in descending order): liver (median, 11.6 ng/g), kidney (median, 9.04 ng/g), spleen (median, 5.92 ng/g), adipose (median, 2.54 ng/g), and muscle (median, 1.11 ng/g). Loskop Dam tilapia have been affected by an inflammatory disease of the adipose tissue known as pansteatitis, so this study also aimed to investigate relationships between PFAA tissue concentrations and incidence of pansteatitis or fish health status. Results revealed that healthy tilapia exhibited an overall higher (p-value < 0.05) PFAA burden than pansteatitis-affected tilapia across all tissues. Further analysis showed that organs previously noted in the literature to contain the highest PFAA concentrations, such as kidney, liver, and plasma, were the organs driving the difference in PFAA burden between the two tilapia groups. Care must be taken in the interpretations we draw from not only the results of our study, but also other PFAA measurements made on populations (human and wildlife alike) under differing health status. 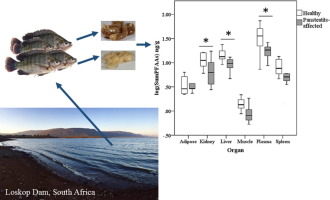