Based on satellite image data and China’s Statistical Yearbooks (2000 to 2014), we estimated the total mass of crop residue burned, and the proportion of residue burned in the field vs. indoors as domestic fuel. The total emissions of various pollutants from the burning of crop residue were estimated for 2000-2014 using the emission factor method. The results indicate that the total amount of crop residue and average burned mass were 8690.9 Tg and 4914.6 Tg, respectively. The total amount of emitted pollutants including CO2, CO, NOx, VOCs, PM2.5, OC (organic carbon), EC (element carbon) and TC (total carbon) were 4212.4–8440.9 Tg, 192.8–579.4 Tg, 4.8–19.4 Tg, 18.6–61.3 Tg, 18.8–49.7 Tg, 6.7–31.3 Tg, 2.3–4.7 Tg, and 8.5–34.1 Tg, respectively. The emissions of pollutants released from crop residue burning were found to be spatially variable, with the burning of crop residue mainly occurring in Northeast, North and South China. In addition, pollutant emissions per unit area (10 km × 10 km) were mostly concentrated in the central and eastern regions of China. Emissions of CO2, NOx, VOCs, OC and TC were mainly from rice straw burning, while burning of corn and wheat residues contributed most to emissions of CO, PM2.5 and EC. The increased ratio of PM2.5 emissions from crop residue burning to the total emitted from industry during the study period is attributed to the implementation of strict emissions management policies in Chinese industry. This study also provides baseline data for assessment of the regional atmospheric environment. 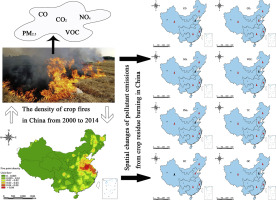