The large-scale development in livestock feed industry has increased the chances of antibiotics and heavy metals contamination in the soil. The fate of antibiotic resistance genes (ARGs) and microbial community in heavy metals and antibiotic contaminated soil is still unclear. In this study, we investigated the effect of cadmium (Cd) addition on the transport of ARGs, microbial community and human pathogenic bacteria in oxytetracycline (OTC) contaminated soil. Results showed that the addition of OTC significantly increased the abundance of ARGs and intI1 in the soil and lettuce tissues. The addition of Cd to OTC treated soil further increased the abundance and translocation of ARGs and intI1. Moreover, Cd promoted the transfer of potential human pathogenic bacteria (HPB) into lettuce tissues. Compared with O10 treatment, the addition of Cd decreased the concentration of OTC in soil and lettuce tissue, but slightly increased the fresh weight of lettuce tissues. Redundancy analysis indicated that bacterial community succession is a major factor in ARGs variation. Network analysis indicated that the main host bacteria of ARGs were mainly derived from Proteobacteria. Correlation analysis showed that intI1 was significantly correlated with tetG, tetC, sul1, sul2, ermX, and ermQ. Meanwhile, potential HPB (Clostridium, and Burkholderia) was significantly correlated with intI1 and eight ARGs (tetG, tetC, tetW, tetX, sul1, sul2, ermX, and ermQ.). The findings of this study suggest that the addition of heavy metals to agricultural fields must be considered in order to reduce the transfer of ARGs in the soil and crops. 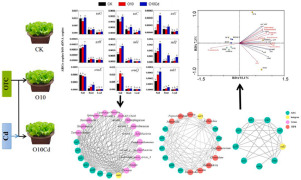