Distribution, risk and bioavailability of metals in sediments of Lake Yamdrok Basin on the Tibetan Plateau, China

Total contents of metals in soil and sediments on the Tibetan Plateau of China have been widely analyzed, but existing information is insufficient to effectively evaluate metal ecological risk because of a lack of metal bioavailability data. In this study, distribution, potential risk, mobility and bioavailability of metals in sediments of Lake Yamdrok Basin in Tibet of China were explored by combined use of total digestion, sequential extraction and the diffusive gradient in thin-films (DGT). Average concentrations of Cr, Ni, Cu, Zn, As, Cd and Pb in surface sediments were 31.25, 30.31, 22.00, 45.04, 31.32, 0.13 and 13.39 mg/kg, respectively. Higher levels of metals were found near the inflowing rivers. Residual form was dominant in Cr, Ni, Zn, Cd and Pb, and reducible form was dominant in As and Cd. Metals in surface sediments showed a low enrichment degree overall, but Cd and As had higher ecological risk levels than the other metals. Furthermore, there was a larger average proportion of exchangeable form of As (20.4%) and Cd (9.0%) than the other metals (1.7%-3.3%), implying their higher mobility and release risk. Average DGT-labile concentrations of Cr, Ni, Cu, Zn, As, Cd and Pb were 0.5, 4.5, 0.7, 25.1, 60.0, 0.22 and 1.0 µg/L, respectively. The DGT-labile As was significantly correlated with extractable As forms (p< 0.01), suggesting that extractable As in sediments acts as a “mobile pool” for bioavailable As. These results suggest potential risks of As and Cd, especially As, deserve further attention in Lake Yamdrok Basin. 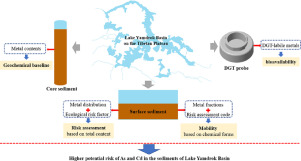