PM2.5 characterization of primary and secondary organic aerosols in two urban-industrial areas in the East Mediterranean

Primary and secondary organic aerosols in PM2.5 were investigated over a one-year campaign at Zouk Mikael and Fiaa, Lebanon. The n-alkanes concentrations were quite similar at both sites (26-29 ng/m3) and mainly explained by anthropogenic emissions rather than natural ones. The concentrations of total Polycyclic Aromatic Hydrocarbons (PAHs) were nearly three times higher at Zouk Mikael (2.56 ng/m3) compared to Fiaa (0.95 ng/m3), especially for indeno[1,2,3-c,d]pyrene linked to the presence of the power plant. A characteristic indeno[1,2,3-c,d]pyrene/(indeno[1,2,3-c,d]pyrene + benzo[g,h,i]perylene) ratio in the range 0.8-1.0 was determined for heavy fuel oil combustion from the power plant. Fatty acids and hopanes were also investigated and were assigned to cooking activities and vehicular emissions respectively. Phthalates were identified for the first time in Lebanon with high concentrations at Zouk and Fiaa (106.88 and 97.68 ng/m3 respectively). Moreover, the biogenic secondary aerosols revealed higher concentrations in summer. The total terpene concentration varied between 131 ng/m3 at Zouk Mikael in winter to 469 ng/m3 at Fiaa in summer. Additionnally, the concentrations of the dicarboxylic acids especially for adipic and phthalic acids were more influenced by anthropogenic sources.The analysis of molecular markers and diagnostic ratios indicated that the sites were strongly affected by anthropogenic sources such as waste open burning, diesel private generators, cooking activities, road transport, power plant, and industrial emissions. Moreover, results showed different pattern during winter and summer seasons. Whereas, higher concentrations of biogenic markers were clearly encountered during the summer period. 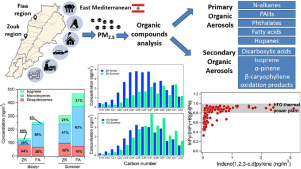