Source apportionment of PM2.5 and visibility in Jinan, China

Atmospheric extinction is impacted by the chemical composition of particles. To better understand the chemical composition of PM2.5 (particles with diameters of less than 2.5 μm) and its relationship with extinction, one-month sampling campaigns were carried out in four different seasons from 2013 to 2014 in Jinan, China. The seasonal average concentrations of PM2.5 were 120.9 (autumn), 156.6 (winter), 102.5 (spring), and 111.8 μg/m3 (summer). The reconstructed PM2.5 chemical composition showed that sulfate, nitrate, chlorine salt, organic matter (OM), mineral dust, elemental carbon (EC) and others accounted for 25%, 14%, 2%, 24%, 22%, 3% and 10%, respectively. The relationship between the chemical composition of PM2.5 and visibility was reconstructed by the IMPROVE method, and ammonium sulfate, ammonium nitrate, OM and EC dominated the visibility. Seven main sources were resolved for PM2.5, including secondary particles, coal combustion, biomass burning, industry, motor vehicle exhaust, soil dust and cooking, which accounted for 37%, 21%, 13%, 13%, 12%, 3% and 1%, respectively. The contributions of different sources to visibility were similar to those to PM2.5. With increasing severity of air pollution, the contributions of secondary particles and coal combustion increased, while the contribution of motor vehicle exhaust decreased. The results showed that coal combustion and biomass burning were still the main sources of air pollution in Jinan. 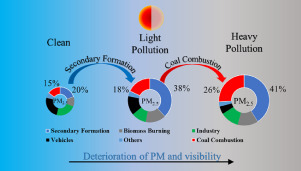