Using a bottom-up estimation method, a comprehensive, high-resolution emission inventory of gaseous and particulate atmospheric pollutants for multiple anthropogenic sectors with typical local sources has been developed for the Harbin-Changchun city agglomeration (HCA). The annual emissions for CO, NOx, SO2, NH3, VOCS, PM2.5, PM10, BC and OC during 2017 in the HCA were estimated to be 5.82 Tg, 0.70 Tg, 0.34 Tg, 0.75 Tg, 0.81Tg, 0.67 Tg, 1.59 Tg, 0.12 Tg and 0.26 Tg, respectively. For PM10 and SO2, the emissions from industry processes were the dominant contributors representing 54.7% and 49.5%, respectively, of the total emissions, while 95.3% and 44.5% of the total NH3 and NOx emissions, respectively, were from or associated with agricultural activities and transportation. Spatiotemporal distributions showed that most emissions (except NH3) occurred in November to March and were concentrated in the central cities of Changchun and Harbin and the surrounding cities. Open burning of straw made an important contribution to PM2.5 in the central regions of the northeastern plain during autumn and spring, while domestic coal combustion for heating purposes was significant with respect to SO2 and PM2.5 emissions during autumn and winter. Furthermore, based on Principal Component Analysis and Multivariable Linear Regression model, air temperature, relative humidity, electricity and energy consumption, and the urban and rural population were optimized to be representative indicators for rapidly assessing the magnitude of regional atmospheric pollutants in the HCA. Such indicators and equations were demonstrated to be useful for local atmospheric environment management. 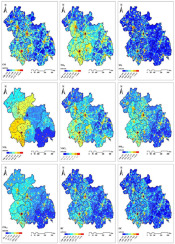