The distribution and chemical speciation of arsenic (As) in different sized atmospheric particulate matters (PMs), including total suspended particles (TSP), PM10, and PM2.5, collected from Baoding, China were analyzed. The average total mass concentrations of As in TSP, PM10, and PM2.5 were 31.5, 35.3, and 54.1 µg/g, respectively, with an order of PM2.5 >PM 10 > TSP, revealing that As is prone to accumulate on fine particles. Due to the divergent toxicities of different As species, speciation analysis of As in PMs is further conducted. Most of previous studies mainly focused on inorganic arsenite (iAsIII), inorganic arsenate (iAsV), monomethylarsonate (MMA), and dimethylarsinate (DMA) in PMs, while the identification and sensitive quantification of trimethylarsine oxide (TMAO) were rarely reported. In this study, a high-performance liquid chromatography coupled to inductively coupled plasma mass spectrometry system was optimized for As speciation including TMAO in PMs. An anion exchange column was used to separate MMA, DMA and iAsV, while a cation exchange column to separate TMAO and iAsIII. Results showed that iAsV was the dominate component in all the samples, corresponding to a portion of 79.2% ± 9.3% of the total extractable species, while iAsIII, TMAO and DMA made up the remaining 21%. Our study demonstrated that iAsIII accounted for about 14.4% ± 11.4% of the total extracted species, with an average concentration of 1.7 ± 1.6 ng/m3. It is worth noting that TMAO was widely present in the samples (84 out of 97 samples), which supported the assumption that TMAO was ubiquitous in atmospheric particles. 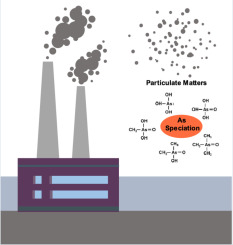