Cross-boundary transport and source apportionment for PM2.5 in a typical industrial city in the Hebei Province, China: A modeling study

Cross-boundary transport of air pollution is a difficult issue in pollution control for the North China Plain. In this study, an industrial district (Shahe City) with a large glass manufacturing sector was investigated to clarify the relative contribution of fine particulate matter (PM2.5) to the city's high levels of pollution. The Nest Air Quality Prediction Model System (NAQPMS), paired with Weather Research and Forecasting (WRF), was adopted and applied with a spatial resolution of 5 km. During the study period, the mean mass concentrations of PM2.5, SO2, and NO2 were observed to be 132.0, 76.1, and 55.5 μg/m3, respectively. The model reproduced the variations in pollutant concentrations in Shahe at an acceptable level. The simulation of online source-tagging revealed that pollutants emitted within a 50-km radius of downtown Shahe contributed 63.4% of the city's total PM2.5 concentration. This contribution increased to 73.9±21.2% when unfavorable meteorological conditions (high relative humidity, weak wind, and low planetary boundary layer height) were present; such conditions are more frequently associated with severe pollution (PM2.5 ≥ 250 μg/m3). The contribution from Shahe was 52.3±21.6%. The source apportionment results showed that industry (47%), transportation (10%), power (17%), and residential (26%) sectors were the most important sources of PM2.5 in Shahe. The glass factories (where chimney stack heights were normally < 70 m) in Shahe contributed 32.1% of the total PM2.5 concentration in Shahe. With an increase in PM2.5 concentration, the emissions from glass factories accumulated vertically and narrowed horizontally. At times when pollution levels were severe, the horizontally influenced area mainly covered Shahe. Furthermore, sensitivity tests indicated that reducing emissions by 20%, 40%, and 60% could lead to a decrease in the mass concentration of PM2.5 of of 12.0%, 23.8%, and 35.5%, respectively. 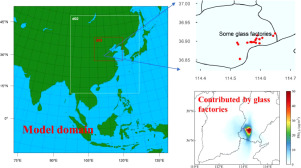