This study analyzed the function of different glutathione S-transferase (GST) isoforms and detoxification metabolism responses in Manila clam, Ruditapes philippinarum, exposed to 4 kinds of polycyclic aromatic hydrocarbons (PAHs) single, and their mixtures for 15 days under laboratory conditions. 13 kinds of GSTs in R. philippinarum were classified, and the results of tissue distribution indicated that 12 kinds of GSTs (except GST sigma 3) expressed most in digestive glands. We detected the mRNA expression levels of aryl hydrocarbon receptor signaling pathway, and detoxification system in digestive glands of clams exposed to benzo[a]pyrene (BaP), chrysene (CHR), benzo[a]anthracene (BaA), benzo[b]fluoranthene (BbF), and BaP + CHR + BaA + BbF, respectively. Among these genes, we selected GST-sigma, GST-omega and GST-pi as potential indicators to BaP; GST-sigma, GST-A and GST-rho to CHR; GST-pi, GST-sigma, GST-A, GST-rho and GST-microsomal to BaA; GST-theta and GST-mu to BbF; while GST-pi and GST-mu to the mixture of BaP, CHR, BaA and BbF. Additionally, the bioaccumulation of PAHs in tissues increased remarkably over time, and showed an obvious dose-effect. Under the same concentration, the bioaccumulation in single exposure group was higher than that in mixture group, and the bioaccumulation of PAHs in tissues with different concentrations of stress was irregular. The results revealed the metabolic differences and bioaccumulation rules in clams exposed to four kinds of PAHs, and provided more valuable information for the PAHs risk assessment. 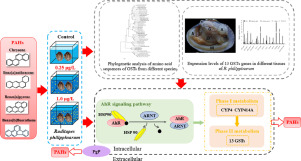