Iron-oxidizing strain (FeOB) and iron modified biochars have been shown arsenic (As) remediation ability in the environment. However, due to the complicated soil environment, few field experiment has been conducted. The study was conducted to investigate the potential of iron modified biochar (BC-FeOS) and biomineralization by a new found FeOB to remediate As-contaminated paddy field. Compared with the control, the As contents of GB (BC-FeOS), GF (FeOB), GFN (FeOB and nitrogen fertilizer), GBF (BC-FeOS and FeOB) and GBFN (BC-FeOS, FeOB and nitrogen fertilizer) treatments in pore water decreased by 36.53%–80.03% and the microbial richness of iron-oxidizing bacteria in these treatments increased in soils at the rice maturation stage. The concentrations of available As of GB, GF, GFN, GBF and GBFN at the tillering stage were significantly decreased by 10.78%–55.48%. The concentrations of nonspecifically absorbed and specifically absorbed As fractions of GB, GF, GFN, GBF and GBFN in soils were decreased and the amorphous and poorly crystalline hydrated Fe and Al oxide-bound fraction was increased. Moreover, the As contents of GB, GF, GFN, GBF and GBFN in rice grains were significantly decreased (*P < 0.05) and the total As contents of GFN, GBF and GBFN were lower than the standard limit of the National Standard for Food Safety (GB 2762-2017). Compared with the other treatments, GBFN showed the greatest potential for the effective remediation of As-contaminated paddy fields. 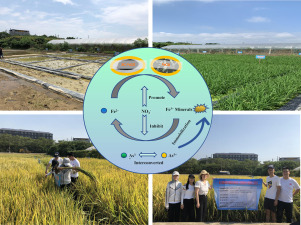