Despite the widespread occurrence of phenols in anthropogenic and natural compounds, their fate in reactions with hypochlorous acid (HOCl), one of the most common water treatment disinfectants, remains incompletely understood. To close this knowledge gap, this study investigated the formation of disinfection by-products (DBPs) in the reaction of free chlorine with seven para-substituted phenols. Based on the chemical structures of the DBPs and the reaction mechanisms leading to their formation, the DBPs were categorized into four groups: chlorophenols, coupling products, substituent reaction products, and ring cleavage products. In contrast to previous studies that investigated the formation of early-stage chlorophenols, the primary focus of this study was on the elucidation of novel ring cleavage products, in particular α, β-unsaturated C4-dialdehydes, and C4-dicarboxylic acids, which, for the first time, were identified and quantified in this study. The molar yields of 2-butene-1,4-dial (BDA), one of the identified α, β-unsaturated C4-dialdehydes, varied among the different phenolic compounds, reaching a maximum value of 10.4% for bisphenol S. Molar yields of 2-chloromaleic acid (Cl-MA), one of the identified C4-dicarboxylic acids, reached a maximum value of 30.5% for 4-hydroxy-phenylacetic acid under given conditions. 2,4,6-trichlorophenol (TCP) was shown to be an important intermediate of the parent phenols and the C4-ring cleavage products. Based on the temporal trends of α, β-unsaturated C4-dialdehydes and C4-dicarboxylic acids, their formation is likely attributable to two separate ring cleavage pathways. Based on the obtained results, an overall transformation pathway for the reaction of para-substituted phenols with free chlorine leading to the formation of novel C4 ring cleavage products was proposed. 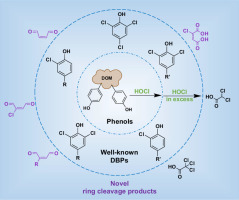