Disinfectants are added to swimming pools to kill harmful pathogens. Although liquid chlorine (sodium hypochlorite) is the most commonly used disinfectant, alternative disinfection techniques like electrochemically generated mixed oxidants or electrochemically generated chlorine, often referred to as salt water pools, are growing in popularity. However, these disinfectants react with natural organic matter and anthropogenic contaminants introduced to the pool water by swimmers to form disinfection byproducts (DBPs). DBPs have been linked to several adverse health effects, such as bladder cancer, adverse birth outcomes, and asthma. In this study, we quantified 60 DBPs using gas chromatography-mass spectrometry and assessed the calculated cytotoxicity and genotoxicity of an indoor community swimming pool before and after switching to a salt water pool with electrochemically generated chlorine. Interestingly, the total DBPs increased by 15% upon implementation of the salt water pool, but the calculated cytotoxicity and genotoxicity decreased by 45% and 15%, respectively. Predominant DBP classes formed were haloacetic acids, with trichloroacetic acid and dichloroacetic acid contributing 57% of the average total DBPs formed. Haloacetonitriles, haloacetic acids, and haloacetaldehydes were the primary drivers of calculated cytotoxicity, and haloacetic acids were the primary driver of calculated genotoxicity. Diiodoacetic acid, a highly toxic iodinated DBP, is reported for the first time in swimming pool water. Bromide impurities in sodium chloride used to electrochemically generate chlorine led to a 73% increase in brominated DBPs, primarily driven by bromochloroacetic acid. This study presents the most extensive DBP study to-date for salt water pools. 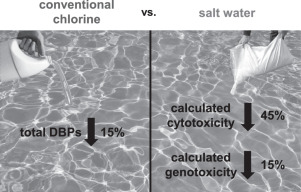